The Pacific Northwest is famed for many things, but not everyone knows that this area is home to some of the top jetski racing champions in the world.

These waterborne athletes open their 2016 season for rounds 1 and 2 of the Northwest Region 3 IJSBA Watercraft Championships April 16-17 at Vance Creek Park on beautiful Bowers Lake in Elma.

“The Pacific Northwest is home to some of the top riders in the world, including three world champions and many other Top 10-ranked riders,” said Dan Lindgren, event organizer. “As this is the season opener, a lot of good riders will be here.”  Race organizers anticipate as many as 60 entries in numerous classes for the two-day event. Regionally based former world champions include Curtis Pitman of Lake Stevens, Maxson Carter of Olympia and David Redinger of Yakima. Organizers expect that up to 20 entrants will have placed in the top 10 worldwide in their individual classes in 2015 – so the level of competition will be fierce.

Racers earn points for the Northwest Region Championships, along with earning their spots to compete in the world finals competition held in Lake Havasu, Arizona, on the Colorado River in October.

Ski Class riders are expected to come in high numbers.  There will also be classes for Sport and Runabout competitors.  Aerial Watercraft are expected as well.  Here is Blake’s tentative site plan: 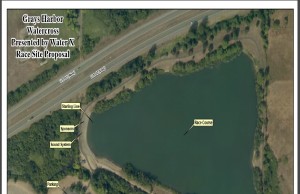 IJSBA is supporting Blake’s Water X with some special incentives.  But you don’t need them.  Blake is awesome, PWC racing is awesome, and IJSBA is certainly very awesome so you don’t want to miss this race because it is going to be some kind of triple awesome event!