The Coast Guard has opened the Oil Spill Liability Trust Fund in the amount of $25,000 to minimize pollution potential from the 125-foot former research vessel Hero, which partially sank at the pier in Bay Center near Willapa Bay, Washington, Monday.

The Oil Spill Liability Trust Fund was utilized to contract Global Diving and Salvage resulting in the removal of more than 70 gallons of diesel fuel and lube oil from the vessel, Tuesday.

On Monday, Coast Guard Sector Columbia River personnel were notified of the sunken vessel. Coast Guard personnel alongside the Washington Department of Ecology personnel responded to the assess any pollution risks. A light sheening was reported.

Response crews deployed sorbent booms and pads around the vessel to contain any residual product.

Coast Guard and the Department of Ecology personnel will continue to monitor the vessel for any further pollution. 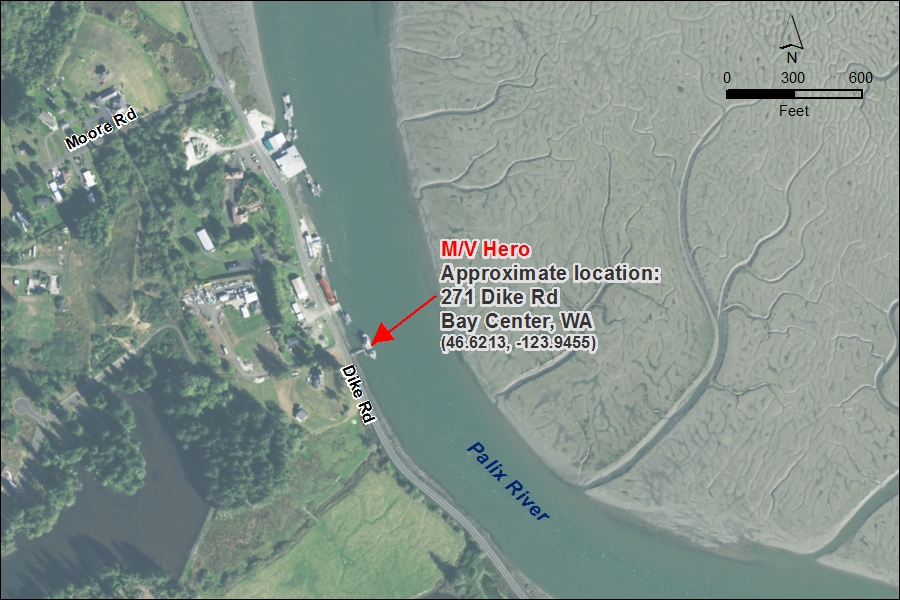 The U.S. Coast Guard, and the Washington Department of Ecology are responding to a sunken vessel just south of Bay Center at 271 Bay Center Dike Road on the Palix River.

The Coast Guard and Ecology were notified of the incident by Pacific County EMD at 12:58 p.m. on Saturday, March 4. The report indicated that the former research vessel was moored, sinking and emitting a light sheen. A Coast Guard inspection determined that the vessel was not a threat to navigation.

Upon Ecology’s arrival on Sunday, March 5, a light, unrecoverable rainbow sheen was observed. It dissipated with the tide while our responders were on scene. Sorbent booms were not placed around the vessel because of swift river currents and the risk they posed to navigation.

The Coast Guard boarded the vessel in 2013, and at that time found that it held at least ~25 gallons of lube oil, and ~5 gallons of diesel. The amount of oil on board the vessel today is unknown.

On Monday the Coast Guard, Ecology and the Washington Department of Natural Resources, owners of the tidelands on which the vessel is sitting, discussed methods for mitigating the situation. The Coast Guard opened the National Oil Pollution Liability Trust Fund to hire a contractor to assess the vessel and remove remaining petroleum products onboard.

Due to the location (narrow channel, strong currents, significant tidal changes, etc.) and the potential unstable condition of the vessel, there is a possibility that diving may not be an option due to safety concerns. Removal of the pollution threat is the immediate goal. Future plans for raising, salvage and/or removal of the vessel will need to be conducted by WA Dept. of Natural Resources as the federal fund may not be used for vessel removal.

The plan is to begin the vessel assessment as soon as possible Tuesday, March 7, during low tide.